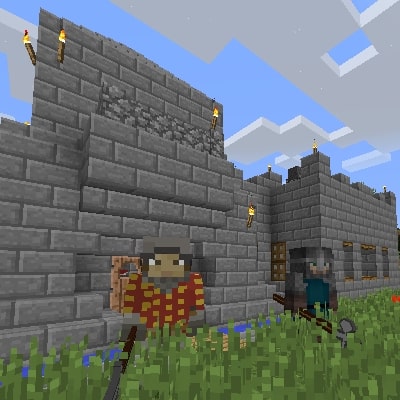 Adventure and RPG
1.16.5
GuardsCraft It's work is hidden in its name, it does its job well with one of the best features, after using GuardsCraft, the user starts experiencing royalty, with the help of this you can keep a guard for the security of your building. are combined into two forms, a melee and a ranged, among which are a swordsman, lancer, archer, crossbowman, and others. In GuardsCraft there is only one new currency to be hired, which will be mined by melting nuggets in a furnace. In addition, you need to use special tables that need to be crafted from 7 planks, a banner, and a wooden sword or bow. TIPs : GuardsCraft 1.16.4 and 1.16.5 offer us the possibility of hiring guards to defend us as players, following us wherever we go, or to protect our base of operations, leaving these units in a specific position, preventing them from following us. The guards that we can hire with this mod can be grouped into two types. The melee guards and the ranged attack guards. To hire ranged attack guards we will have to make a block called "Recruit desk for units distance", while to hire melee units we will have to make the block "Recruit desk for units melle". GuardsCraft is a Minecraft 1.16.5 mod that significantly increases the difficulty of the game! It includes a lot of new mobs and fun gameplay