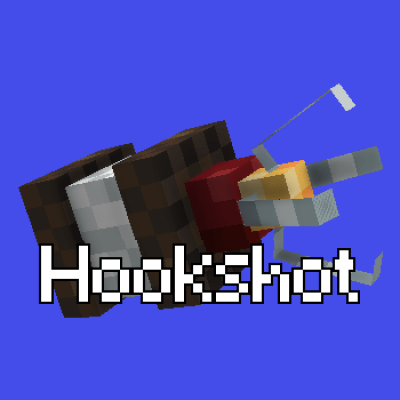 Adventure and RPG
1.17.1
Hookshot is a small mod of Minecraft apk that helps players to move around, in which the player helps to move his place with the help of hooks Hookshot was released on Jul 19, 2020, which became very popular among players in the last year so far Hookshot has been downloaded by around 95,708 people it comes in the armor, tool, and weapon category. The default Hookshot limit of 24 blocks. The default speed of 10 blocks/s The developer of the Hookshot mod is Camellias who has given many great Minecraft mods over the last 7 years Hookshot is an item added by Legend Gear.

Hookshot is also known as Webslinger Mod To use it, you need to have a version of Minecraft above 1.16.1. Some new features have also been added to this mod, which is making this mod even more popular. This mod adds a hook shot that allows you to sling around the map to Minecraft. This mod does not add the Titans as seen in some of the mod reviews. Titans is a separate mod and is outdated at the moment.
Download Now
Share It
426